INEFFABLE
The tetragrammaton ‘Yud, Hay, Vav, Hay’ is the ineffable Hebrew Name of G-d.
It is beyond description, not to be uttered.
According to Jewish Mysticism, there were 4 stages of G-d’s creation of the world, beginning with a spark of inspiration.

From there, the concept developed.  Emotional involvement led to the formation of a concrete plan.

The final stage was the action: Creation.
This 4-staged process is analogous to the 4 spiritual worlds of Atzilut, Beriah, Yetzirah and Asiyah.

Asiyah is the physical (and lowest) world in which we live. It is in this world,

that Adonai commanded us to build a sanctuary for Him so that He could dwell among us. (Exodus 25:8)
A spiral is the eternal sign of the creative and organizing principle of the universe.
It is the intuitive symbol of spiritual development. When two spirals are intertwined,
they become a double helix, a twisted ladder that enables descending and ascending.
As one spiral descends through the four worlds, the other spiral ascends to expand
the soul’s levels of consciousness, from Nefesh, Ruach, Neshamah, Chaya to Yechida.
This journey allows the soul to travel from the physical world, through heightened levels
of emotion, understanding, and knowledge of truth without ego.
Ultimately, the soul bonds with the Holy One.
The double helix is the symbol for DNA, the genetic formula that makes us who we are.
By examining G-d’s stages of creation and the soul’s levels of consciousness,
we are able to complete the code by adding the spiritual dimension. 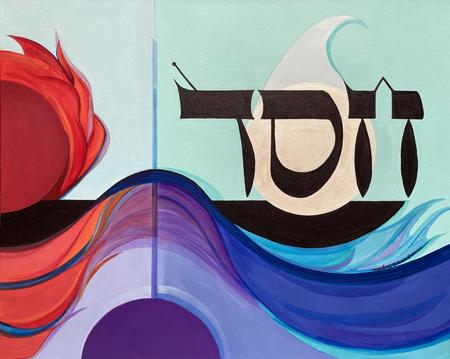 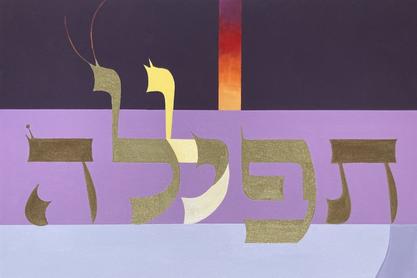 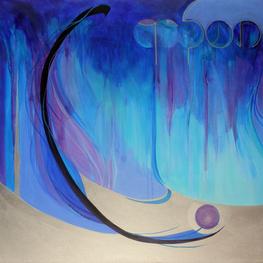 What is a soul? Who has a soul? Where does a soul reside? Is a soul eternal?
The soul has been the center of great philosophical and religious discussions since time immemorial.
The Torah is sprinkled with three words that help define the soul: nefesh, ruach and neshama.
Their individual meanings have evolved throughout the Tanach
as we have wrestled with defining the innate source of spirituality.

In this visual expression, the Kabbalistic interpretation was chosen,
focusing on the first three ascending levels of the soul.
Each word stands on its own in design and concept but is also an integral part of the triptych.

Nefesh: At this basic, animalistic level, body and soul are one.
Man was created from the dust of the earth and G-d breathed soul into him.
The nefesh painting shows the paths from the earth below and from the breath of G-d above.

Ruach: This level of the soul connects nefesh to higher realms.
Meaning spirit and wind, ruach's energy enables the nefesh to ascend.
The ruach painting embodies the major movement in the triptych, connecting the paintings on either side.
The dot of the vav is the center of the total design, reminding us that G-d is the center of all things.

Neshama: This is the highest level our souls can attain within the framework of our understanding.
At this level, a soul strives to connect with G-d using intelligence, awe and "rapture of the heart."
The golden circle in the neshama painting symbolizes G-dliness.
The brilliant red expresses that this level is closest to G-d.

A spiral runs through all three paintings. Much like a staircase, it travels both ways.
G-d's breath descends to implant the soul in the body.
The soul ascends to G-d through actions, emotions, and thought. 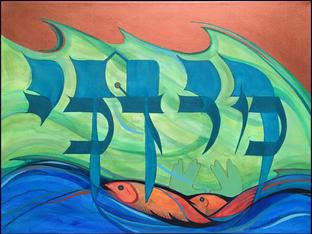 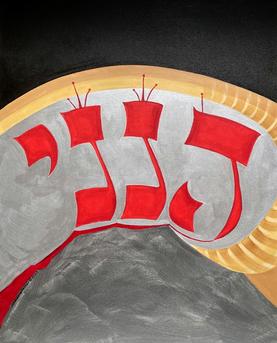 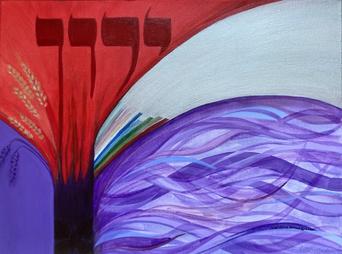 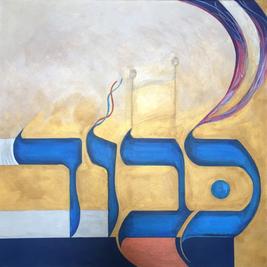 The Hebrew word for prayer is Tefillah.
Just as it would be impossible to fully explain prayer in a few, short paragraphs,
it is impossible to express its meaning on one canvas.
For that reason, I have chosen to examine the root (shoresh) of the word,
which explains the presence of a second lamed in the painting.
Pay, Lamed, Lamed is the root.
When we look at other words in the Torah with the same root,
we find words that mean to judge and thinking. It is here that we discover
what the purpose of Tefillah is meant to be.
Through the regular act of self-examination, we have the opportunity
to change ourselves, rather than petition G-d to change things for us.
Thus, prayer can be seen as a gift, instead of an obligation.

In this visual expression, the metallic colors of the letters brighten up at the center
where the root word is located. The canvas is divided into three shades of purple:
amethyst, lilac and aubergine.
They represent the times of the day when it is our duty to pray.
A column of the fiery colors of the spectrum,
symbolizes the Creator meeting us with our authentic words of prayer.
To quote Rabbi Jonathan Sacks,
“...Prayer is where G-d meets us, in the human heart,
in our offering of words, in our acknowledged vulnerability.” 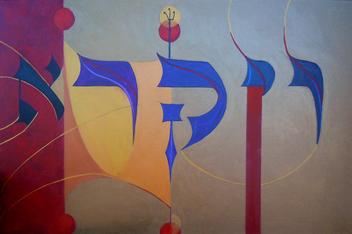 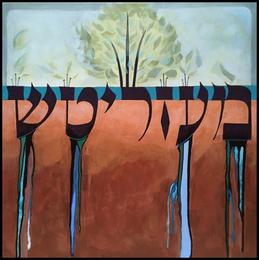 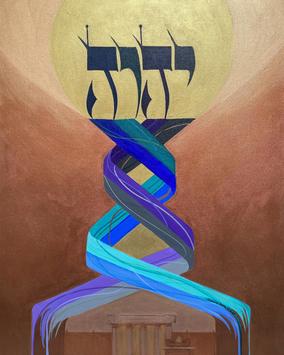 The Hebrew word, Chesed, is often defined as loving kindness.
According to Kabbalah, it is one of ten sefirot: emanations or qualities of G-d.
In this visual expression, the word Chesed is approached from a mystical perspective.

‘Peace and Love’ and ‘Be Kind’ are not new concepts. They have ancient roots.
The Jewish prayer for peace is Oseh Shalom Bimromav...
“May He who makes peace on high, create peace for us and all of Israel and we say Amen.”
Daily services as well as the Kaddish prayer, end with this powerful petition.

Considering these words begs the question, “What peace does G-d make in the heavens?
Theere is a Midrash that tells us G-d keeps peace between the angels Michael and Gabriel.
Michael represents Chesed while Gabriel represents Gevurah (strength, discipline, judgment).
Keeping the peace between these two attributes creates a balanced union.
The sefirot have assigned colors and signs.
Chesed is white, represented by water. Gevurah is red, represented by fire.
G-d uses a third attribute, Tiferet (beauty, balance) to create peace between the two.
Tiferet is purple and is physically placed between them as mediator.
Look closely and you will see a scale with Chesed and Gevurah and their colors/signs evenly balanced.

Tiferet forms the base of the scale
Design-wise, the flames of fire and waves of water are aesthetically similar.
Color-wise, the blues from the water and the reds from the fire create the purple of Tiferet. 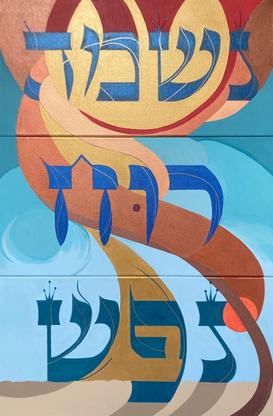 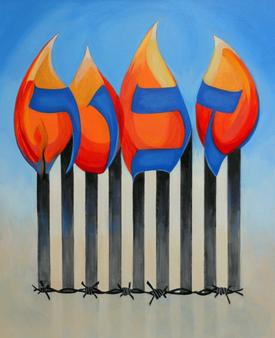 The Akedah (The Binding of Isaac) is probably the most studied story in the Torah and certainly, one of the most dramatic. It is traditionally chanted on the second day of Rosh Hashanah. In it, G-d asks Abraham to take his son to Mt. Moriah as a sacrifice. It is Abraham’s tenth and final trial. The word Hineni means ‘Here I am’ and is said by Abraham three times in this story. The meaning of Hineni is not a simple response to being called by name. Abraham is acknowledging that he is fully present and ready to do what is asked of him.

In this painting, the word Hineni is front and center in a vivid red against a silver backdrop. It sits atop a silhouette of Mt. Moriah.

Red also outlines the path up the mountain that Abraham and Isaac followed.
‘Here I am.’ There is no consideration of the past or future.

In order to highlight the importance of being completely in the moment, the design is darkened out above and below.
Two bands of ocher form an arc above Hineni, representing the repetitions of the word. This arc turns into a ram’s horn to reference the ram that was sacrificed in place of Isaac. A ram’s horn (shofar) is sounded at the New Year.

The arc, resembling a rainbow, also reminds us of G-d’s promise to Noah when He placed a rainbow in the sky.

After the sacrifice is made, G-d offers additional promises and blessings to Abraham and his offspring

This painting serves as a visual tribute to the lives lost in the Holocaust. The stripes of the camp uniforms and the barbed wire are overt associations that are embedded in our collective memory. The flames, reminiscent of yahrtzeit candles, serve as reminders that we must never forget. The color fades out of the image from top to bottom, alluding to fading memories as the Holocaust takes its place in history. Yet, the brightness of the flames and the word, enliven and inspire our spirit to remember.

SHADDAI
UPON THE DOORPOSTS OF YOUR HOUSE

In the first paragraph of the Shema  “Hear, O Israel, The Lord is Our G-d, The Lord is One”),
we are commanded to write these words upon the doorposts of our house and upon our gates.
The Shema and its first two biblical paragraphs from Deuteronomy ( 6:4-9 and 11:13-21 )
are calligraphed on a piece of parchment (klaf) by a scribe (sofer) and placed inside a case.
The word Mezuzah means doorpost, but commonly refers to the parchment and case
that are vertically affixed to the right doorpost, on a diagonal slant toward the entry.

One of G-d’s names, Shaddai, is written on the reverse side of the parchment so that it faces outward. Traditionally the first letter (shin) of Shaddai is on a Mezuzah case as well.
Shaddai is also an acronym for the Hebrew words meaning “Guardian of the Doors of Israel.”
When a mezuzah is affixed to the doorpost of a home, it is a reminder of our exodus from Egypt
when blood marked the Jewish homes to be passed over during the tenth plague.
Today, it is a declaration of our faith as well as a reminder of the words written within.

This year, we need the reminder even more. Our comings and goings have been severely limited.
We are neither seeing nor contemplating our mezuzot and their meanings as we once did.

The shape of this painting was chosen to echo the shape of a Mezuzah. In the composition,
the letter shin is the center of interest, with the other letters of Shaddai descending from its base.
Surrounded by posts and lintel in shades of purple and blue, the shin is contrasted
against a background of shades of red: a color the artist regularly uses to represent G-d.
The message behind that color choice is clear.
When one fulfills the mitzvah of affixing a mezuzah and follows the biblical directives,
the pathway through that door will lead to Adonai, His Sanctification of our homes and His Blessings.

View on Mobile
The fine art of Marlene Burns, Internationally recognized artist. A collection of her contemporary paintings and urban abstract photography.